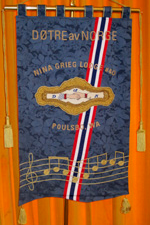 When: Second Saturday at 10:00 am (meeting months may vary)
Where: Viking Room, Sons of Norway Building, 18891 Front Street, Poulsbo, WA

One member works on
a Rogaland bunad

Nina Grieg Lodge members are active in the cultural life of their community of Poulsbo which has Nordic roots. They participate in the Viking Fest Parade in May and the Sons of Norway Jule Fest in December.

Lodge members are accomplished in Nordic arts, crafts, and cooking. Lodge fundraisers include an annual rummage sale which helps support the Daughters of Norway educational scholarships.

The lodge's name honors the noted Norwegian-born singer Nina Grieg, who was the wife of Edvard Grieg. She was born near Bergen. Nina Hagerup was the daughter of Herman Hagerup (brother of Edvard Grieg's mother) and a Danish actress, Madame Werleigh. The family moved to Denmark when Nina was 8 years old. Later, while studying singing in Copenhagen, she met the Norwegian composer, Edvard Grieg. They were married when she was 22 in 1867. She was the leading interpreter of his songs and they performed together throughout Europe. They lived in Christiania with a summer home near Bergen, Troldhaugen.